Hymn Story: How Firm a Foundation

The hymn How Firm a Foundation has been popular among Christians for generations and is a personal favorite of mine. While its origin is a bit of a mystery, the hymn itself has been prominent for generations.

It was first published in 1787 in a hymnbook edited by John Rippon titled A Selection of Hymns from the Best Authors. Its beautiful lyrics exalting the Word of God has made it one of America’s best-loved hymns.

Surprisingly, the name of the author behind this classic hymn is a mystery. In the hymnbook, it was attributed only to “K—.” This is thought by many to be a reference to Robert Keene, who was a friend of John Rippon’s and was the leader of music at the Carter Lane Baptist Church in London when Rippon was the pastor. Even so, the true identity of the author remains a mystery.

Despite the anonymity of its origins, for over 230 years How Firm a Foundation has brought comfort and encouragement to countless believers. It was sung at the death bead of President Andrew Jackson and at the funerals of Robert E. Lee and Theodore Roosevelt.

An interesting account of these lyrics bringing comfort – and unity – in times of uncertainty is found in an anecdote from the Spanish-American war. This conflict came about 30 years after the end of the US Civil War, and tensions between the North and the South were still high.

On Christmas Eve, 1898, it was sung by an entire corps of the United States Army encamped near Havana, Cuba. Lieutenant-Colonel Curtis Guild, Jr. related the inspiring story to The Sunday-School Times back in 1901. Guild wrote:

On Christmas eve of 1898 I sat before my tent in the balmy tropical night [near Havana] chatting with a fellow-officer of Christmas and home.

Suddenly from the camp of the Forty-ninth Iowa rang a sentinel’s call, “Number ten; twelve o’clock, and all’s well!” It was Christmas morning. Scarcely had the cry of the sentinel died away, when from the bandsmen’s tents of that same regiment there rose the music of an old, familiar hymn, and one clear baritone voice led the chorus that quickly ran along those moonlit fields: ‘How firm a foundation, ye saints of the Lord!’

Another voice joined in, and another, and another, and in a moment the whole regiment was singing, and then the Sixth Missouri joined in, with the Fourth Virginia, and all the rest, till there, on the long ridges above the great city whence Spanish tyranny once went forth to enslave the New World, a whole American army corps was singing –

Fear not, I am with thee, O be not dismayed;
For I am thy God, and will still give thee aid;
I’ll strengthen thee, help thee and cause thee to stand,
Upheld by My righteous, omnipotent hand.

The Northern soldier knew the hymn as one he had learned beside his mother’s knee. To the Southern soldier it was that and something more; it was the favorite hymn of General Robert E. Lee, and was sung at that great commander’s funeral.

Protestant and Catholic, North and South were singing together on Christmas day in the morning – now that’s an American army!

Below are the full lyrics to this wonderful hymn: 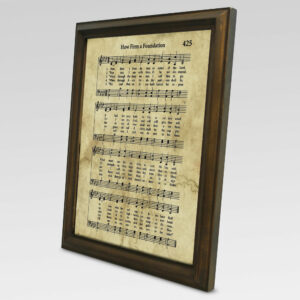 Purchase a digital file of this beautiful hymn, ready to print and frame. Check it out in the store!

How firm a foundation, ye saints of the Lord,
is laid for your faith in His excellent Word!
What more can He say than to you He hath said,
who unto the Savior for refuge have fled?

In every condition, in sickness, in health,
in poverty’s vale, or abounding in wealth,
at home and abroad, on the land, on the sea,
as days may demand, shall thy strength ever be.

Fear not, I am with thee; O be not dismayed,
for I am thy God and will still give thee aid.
I’ll strengthen thee, help thee, and cause thee to stand,
upheld by My righteous, omnipotent hand.

When through the deep waters I call thee to go,
the rivers of sorrow shall not overflow;
for I will be with thee, thy troubles to bless,
and sanctify to thee thy deepest distress.

When through fiery trials thy pathway shall lie,
My grace, all-sufficient, shall be thy supply.
The flame shall not hurt thee; I only design
thy dross to consume, and thy gold to refine.

The soul that on Jesus hath leaned for repose
I will not, I will not desert to his foes;
that soul, though all hell should endeavor to shake,
I’ll never, no never, no never forsake!

Listen to How Firm a Foundation

Hymn Story: What A Friend We Have In Jesus
Previous Post
The Apostle Paul on The Impact of Salvation By Faith Alone