Originally titled ‘Hymn for Easter Day,’ Charles Wesley published the well-loved anthem ‘Christ the Lord is Risen Today’ in 1739 – which was within the first year of his conversion. The song had its debut during the first worship service at the Wesleyan Chapel in London, England known as the Foundry Meeting House.

However, the original lines find their origin long before 1739. The inspiration for this hymn can be traced back to one written in Latin in the 14th century. In the early 1700s that song was translated into English and published as “Jesus Christ is Risen Today.” It was this short hymn that served as the building blocks for what would be adapted and expanded by Charles Wesley.

There have been some changes over the years, and the song you are most familiar with is likely different than Wesley’s original composition. Originally the song consisted of eleven stanzas, without the “Alleluias!” that echoes throughout the unfolding celebration of Christ’s Resurrection.

The original tune that Wesley used for it is also different than what you’re used to hearing (here’s how it originally sounded). An unknown editor later changed the tune to accommodate the alleluias at the end of each line.

Although many hymnals feature a much shorter version of this hymn – often just four stanzas – versions of this hymn have been enthusiastically sung in Easter services for over 280 years. May it continue to be a blessing to you and your church as you celebrate the Resurrection of our Lord on Easter Sunday!

Here are the original lyrics to this beloved hymn:

Love’s Redeeming Work is done,
Fought the Fight, the Battle won,
Lo! our Sun’s Eclipse is o’er,
Lo! He sets in Blood no more. 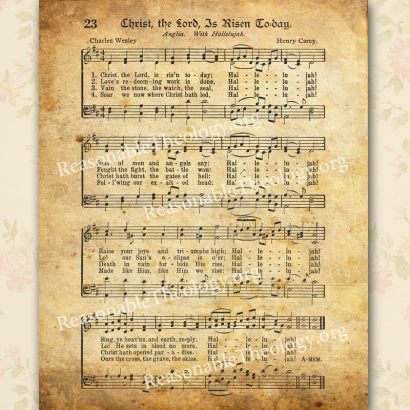 Download a vintage print of this hymn, ready to print and frame!

Lives again our glorious King,
Where, O Death, is now thy Sting?
Once He died our Souls to save,
Where thy Victory, O Grave?

Soar we now, where Christ has led,
Following our Exalted Head,
Made like Him, like Him we rise:
Ours the Cross; the Grave; the Skies.

What tho’ once we perish’d All,
Partners of our Parent’s Fall,
Second Life we All receive,
In our Heav’nly Adam live.

Ris’n with Him, we upward move,
Still we seek the Things above,
Still pursue, and kiss the Son,
Seated on his Father’s Throne;

Scarce on Earth a Thought bestow,
Dead to all we leave below,
Heav’n our Aim, and lov’d Abode,
Hid our Life with Christ in God!

Hid; ’till Christ our Life appear,
Glorious in his Members here:
Join’d to Him, we then shall shine
All Immortal, all Divine!

Hail the Lord of Earth and Heav’n!
Praise to Thee by both be giv’n:
Thee we greet Triumphant now;
Hail the Resurrection Thou!

King of Glory, Soul of Bliss,
Everlasting Life is This,
Thee to know, thy Pow’r to prove,
Thus to sing, and thus to love!

And Here’s the Version You’re More Familiar With:

Soar we now where Christ hath led, Alleluia!
Foll’wing our exalted Head, Alleluia!
Made like Him, like Him we rise, Alleluia!
Ours the cross, the grave, the skies, Alleluia!

Listen to Christ the Lord is Risen Today

Faith and Doctrine, God & the Life of Jesus

What Does it Really Mean to Pray in Jesus’ Name?
Gift Ideas for Seminary Students – 2021
Pastors And Their Critics | RTP 46

Pastors And Their Critics | RTP 46
Jesus Christ: Person of Interest | RTP 45
The Importance of Expository Preaching | RTP 44
VIEW ALL